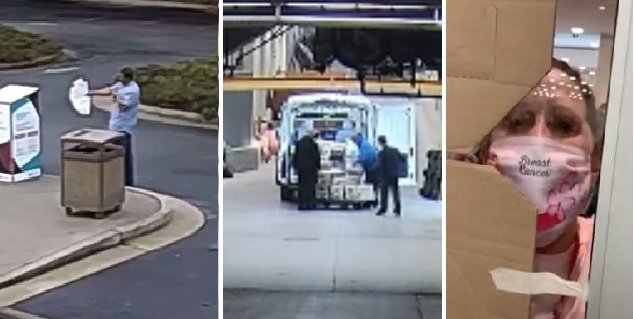 By Storming President Trump’s Residence and Passing $700 Billion Spending Bill During Recession, the Biden Regime Reveals It Is Not Concerned with the 2022 Elections — The Fix Is In!

The Biden gang has no shame, no fear, and no morality.  These liberal fascists who hate America are doing all they can to destroy it.

They know they can get away with it because they aren’t worried about the upcoming midterm election whatsoever.

By their actions, they are telling us that they are not concerned with the 2022 midterm elections.

** Democrats passed a $700 billion spending bill last week during an economic recession with inflation at 9.1%.

** The Biden-Obama regime invaded President Trump’s residence because they could.  They have no fear of repercussions.

On Monday night Dan Bongino weighed in on the Deep State’s “3rd World” raid on President Trump’s house in Florida.  He called it what it is:

Jesse Watters added this on Joe Biden, “He just burned everything to the ground.”

Via Jesse Watter’s on FOX News.

Bongino is right.  All Americans must get to the polls in November.  But what may be underappreciated is that the election process is ripe for fraud.  We know this because this is what happened in the 2020 Election.

The corrupt Democrats know this and this is why they are so blatantly bold in their actions.

We learned in 2020 that the US election process is broken.  Voting machines are designed with gaps where bad actors can manipulate results and elections. (See the box in the chart below identified by IT and AI experts in Georgia.)

In the election process, the results of elections can be altered by bad actors creating new batches, deleting batches, and publishing batches. The machines are certified by agents who aren’t even accredited properly themselves.

Ballots are allowed to be handed in before and up to election day in mailbox-like containers labeled ballot drop boxes.  Anyone can throw ballots in these containers.  There is no management of ballots received and therefore ballots can come from anywhere.  These drop boxes were used in some states despite being illegal.

Voter rolls are inflated with God only knows how many names on the voter lists that aren’t even real.  Huge percentages of these voter rolls are not legitimate but again, nothing is done to address this travesty and ensure only valid voters are maintained on the lists.

The Democrats have machines that can be manipulated, processes that are ripe for fraud, and inventories of bogus names they can use to support a steal.

We know all this can happen because it did in 2020 and there were no repercussions for those who were identified for breaking the law.

It looks like the fascist Democrats are going to do it again.  They will because they can and they have done it before.

The post By Storming President Trump’s Residence and Passing $700 Billion Spending Bill During Recession, the Biden Regime Reveals It Is Not Concerned with the 2022 Elections — The Fix Is In! appeared first on The Gateway Pundit.