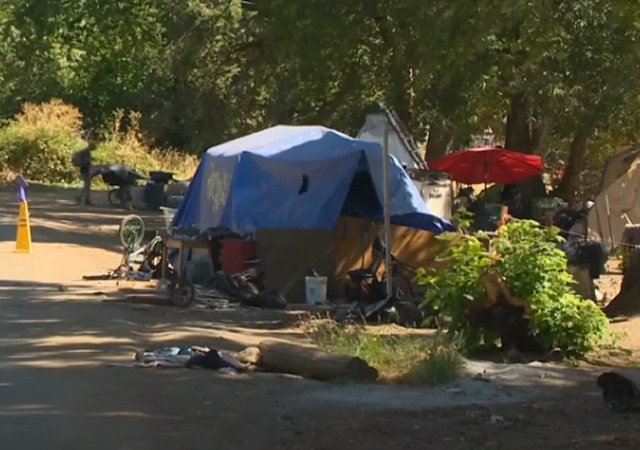 Homeless Camps In Portland, Oregon Are So Bad That Some People Are Selling Their Houses And Leaving (VIDEO)

The city of Portland, Oregon is supposed to be some kind of left wing utopia. Yet the homeless problem there is so bad that some people have actually started selling their houses to escape from it.

Imagine paying property taxes for years on a house that you considered your home and being pushed to this point.

Some of these folks have people camping right behind their houses.

Residents in a Portland, Oregon, neighborhood are resorting to selling their homes and moving due to homeless encampments right outside their front doors.

“It’s a little scary because I know there is mental illness and that concerns me,” North Portland resident Maria Inocencio told KGW8.

Residents of North Portland said at least three families on one street have left in recent days due to the homeless camps, and KGW8 reported seeing for-sale signs up and down streets.

“I would say the migration to the suburbs, I’ve seen quite a bit in the last two years,” real estate broker Lauren Iaquinta said. “Most people don’t want to have to worry about if they can leave their car parked in their driveway overnight without maybe having it broken into. It’s a pretty testy subject.”

Iaquinta said she now studies neighborhoods to see if there are homeless camps in a given area while working with potential buyers.

How did things get this bad?

A root fallacy of the Left is their belief it’s humane to encourage highly addictive, disabling drug use, as though schizophrenics wallowing in filth, urinating on the streets while screaming profanity is a foundational freedom

Another once beautiful city destroyed in 12 years by Democrat control

Residents in Portland are selling their HOMES due to homeless camps https://t.co/hxBN2gHdTl via https://t.co/0y3M0lk4Y0

Why do taxpayers put up with this?

The post Homeless Camps In Portland, Oregon Are So Bad That Some People Are Selling Their Houses And Leaving (VIDEO) appeared first on The Gateway Pundit.