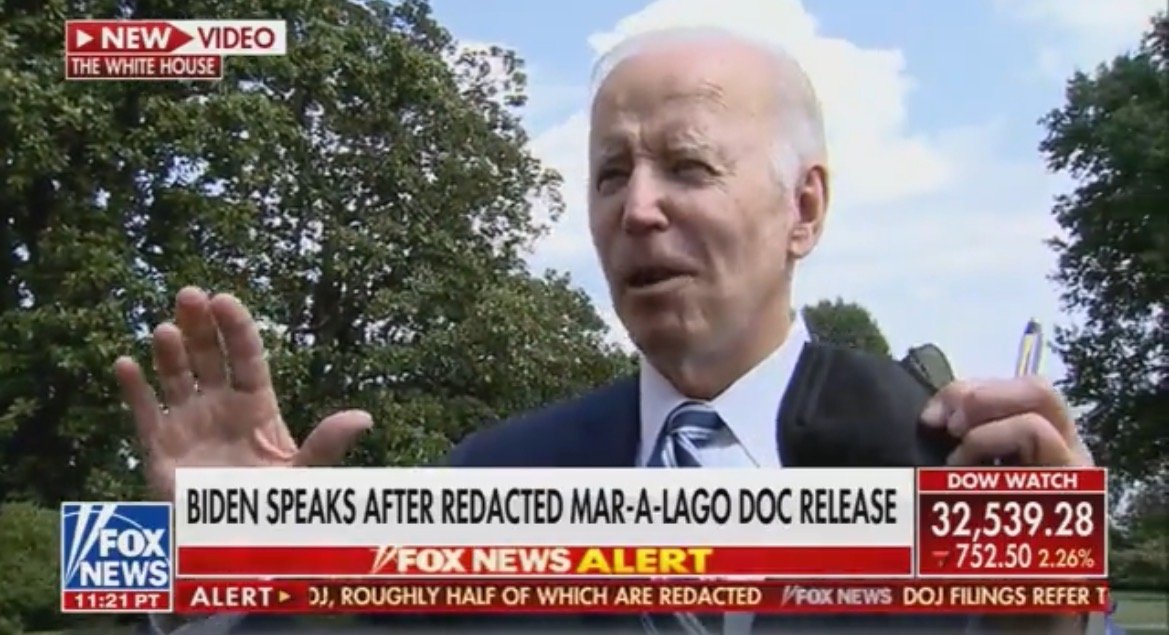 Joe Biden on Friday spoke with reporters as he prepared to depart the White House for another vacation in Delaware.

A reporter asked Biden if Trump could have declassified all the documents stored at Mar-a-Lago.

President Trump recently described the declassification process in a statement to John Solomon of Just The News.

“He had a standing order that documents removed from the Oval Office and taken into the residence were deemed to be declassified,” Trump’s office said in a statement to Just The News. “The power to classify and declassify documents rests solely with the President of the United States. The idea that some paper-pushing bureaucrat, with classification authority delegated BY THE PRESIDENT, needs to approve of declassification is absurd.”

According to investigative reporter Paul Sperry, the FBI seized documents related to its Spygate scandal.

Biden scoffed at Trump’s declassification claims in response to a reporter asking questions about the affidavit.

“Could he have just declassified them all?” the reporter queried.

Biden mocked Trump as he declined to comment on the unsealed FBI raid affidavit.

“I’m not gonna comment because I don’t know the details. I don’t even want to know. Let the Justice Department take care of it,” Biden said.

Biden expects the public to believe he had no clue his DOJ/FBI was going to raid Trump’s home after Joe Biden himself eliminated Trump’s executive privilege.

President Biden, who declines to comment on the specifics of the unsealed Mar-a-Lago affidavit, mocks Donald Trump’s legal strategy:

“‘I’ve declassified everything in the world. I’m president. I can do it all.’ C’mon …” pic.twitter.com/iOEpf1dWKJ

20 out of the 32 pages are either fully or partially redacted.

Joe Biden’s DOJ is so corrupt that it redacted their reasons for redactions in their justification for raiding Trump’s home!

DOJ and FBI are so corrupt that they’re redacting their reasons for redactions in their justification for raiding a U.S. president’s home.

However much contempt you have for these lawless agencies, it’s not nearly enough. pic.twitter.com/dUCOqiYVfP

Attorney and former Constitutional Law Clerk for Justice Gorsuch, Mike Davis, said Trump had every right to declassify anything he wanted.

“The President has the absolute Constitutional authority to declassify anything he wants for any reason he wants and he doesn’t have to get permission from any bureaucrat the National Archives to do that…so there goes the underlying potential charge for espionage that was in this warrant.”