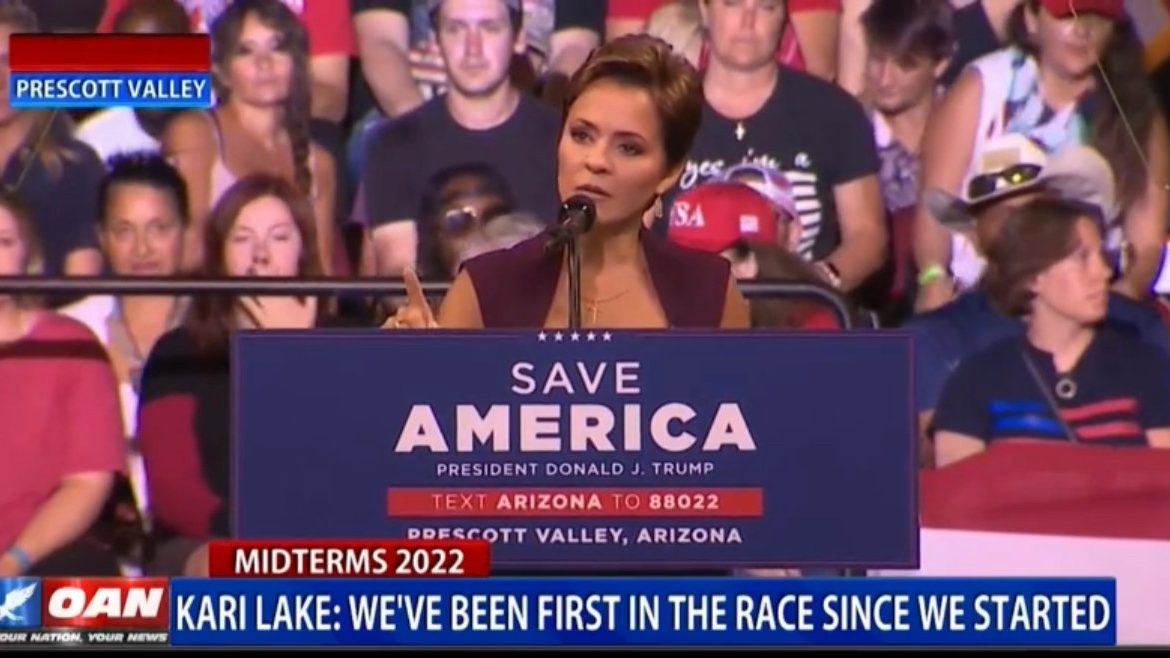 Lake v Hobbs Case in Arizona *DISMISSED*. We’re Sure You Can Guess Why…

Late last month, The Gateway Pundit published a story about the testimony of a former voting machine tester, Clay Parikh, who was an expert witness in a lawsuit calling for Arizona to cease use of electronic voting machines.  Earlier this month, TGP had the opportunity to sit down and interview Mr. Parikh.  He also gave a statement at the Mike Lindell Moment of Truth Summit here.

Yesterday, however, the effort to ban electronic voting machines with super secret source code and private equity firm ownership came to a screeching halt in Lake v. Hobbs.  The case was dismissed, once again, alleging that Kari Lake did not have standing to bring the case.  The whole decision can be read here.

In one of the plaintiff’s allegations, they claimed that the election equipment must go undergo “thorough testing by independent, neutral experts” according to ARS 16-442(A)(B).  While Lake V Hobbs does not deal with the 2020 election, it is worth noting that Arizona machines in 2020 were not certified by an accredited testing lab.  Furthermore, it must also be noted that these testing laboratories have a glaring conflict of interest in certifying these machines.  They are paid to do this work by the manufacturer of the machines they’re certifying.  And to that point, the Pro V&V website states its mission:

“Since our founding in 2011, we have always had one focus: our clients. Pro V&V exists to help its clients comply with regulations in systems and software testing in the most efficient and professional manner possible, and will always be dedicated to verifying your products to your satisfaction.” In Clay Parikh’s testimony, mentioned above, it’s suggested that the testing these machines go through is nothing more than a proverbial check in the box to instill a false sense of security that the machines are functioning properly.

Mr. Parikh was able to hack both Dominion and ES&S machines in a matter of minutes.  He was stopped, however, from going further during his penetration testing that may have revealed the ability to “manipulate statistical data on the machine.”  It would be bad business for these testing labs to prove the paying customer’s product is inadequately secure or deliberately vulnerable.  This is a conflict of interest.

Furthermore, there is evidence to suggest that even with adequate testing that passes EAC certification, there is still not only potential, but actual occurrences of “erroneous code” somehow making its way into the software.  Case in point: Williamson, TN.   According to a report released earlier this year by the EAC: But wait.  This same report states: How could “EAC certified” software have “erroneous code” on it?  Smoke and mirrors?  Conflicts of interest?  While this isn’t the same machine used in Arizona, it is Democracy Suite software in Maricopa on Dominion machines.

Mr. Parikh also confirmed, through the defense counsel’s own redirect, that machines can and do connect to the internet and that the ones that “can’t” still have the means to do so through the motherboard as well as open ports.  The defense counsel also revealed that the Democracy Suite software was “rewritten” (defense attorney’s own words) in 2018.  This is a contentious point because the only company that has certified Dominion machines in Arizona was not accredited in 2018, 2019, or 2020.  So was the “rewritten” Dominion software actually certified not only in Arizona, but anywhere in the United States that it was utilized?

In the Plaintiff’s allegations, it is also mentioned that a “third required audit – a hand count- takes place” and that “representatives of the political parties…randomly select two percent of the polling locations…and count all the ballots by hand.”  But according to testimony from the hearings in Maricopa in November, 2020, this wasn’t done properly.  Dominion ran the reports and the boxes to be audited were “selected” eight days before they were even done tabulating the votes.  How many tens, maybe hundreds of thousands of ballots were not subject to a random selection for this test?

In what is another absolute glaring conflict of interest, in 2020, prior to the Arizona Audit by Cyber Ninjas, Maricopa Co. ordered an “audit” by Pro V&V and SLI Compliance.   Pro V&V, as we know, is the company that, in a massive conflict of interest, is paid by the vendor to certify the vendor’s software to “their satisfaction.”  And now, after an accusation of wrong doing, they are given access to conduct an “audit” to check their own work of which they’d be culpable if something were to happen.  Ironically, after the Cyber Ninja’s conducted their audit, there were discoveries of numerous deleted files, query bombs of 37,000 login attempts that reset the “log in” databases to hide “log in attempts” during the election, and much more.

Based on the above statements, we know that #1 means little to nothing after Clay Parikh’s admissions, the conflicts of interest in who funds these testing labs, and the EAC report where “certified software” was discovered to have “erroneous code” that severely impacted the counts.  #2 would be tough to determine because, as Parikh stated, he was prevented from going further during testing to reveal ways to “manipulate statistical data” on the machines and in the 2020 Arizona Audit, there were over a million , “archived” files.  #3 is impossible to tell because the “Special Master” that was given access to the Routers and Splunk logs wasn’t looking at the same network configuration of the 2020 election and his “investigators” are subject to an NDA and cannot disclose what they found.  #4 Logic and Accuracy testing also showed accurate pre-election numbers in Cherokee Co, KS, in Antrim Co, MI, in Dekalb Co, GA (2022), and Lapeer Co, MI, just to name a few.

In the Analysis portion of the Judge’s decision, he states: It is odd to make these claims while also not adequately checking for such intrusions.  The  “archived” data that was not handed over to the Cyber Ninja’s during the Maricopa Audit, as well as the splunk logs and routers that were never handed over are paramount in proving any of the points listed by the Secretary of State in the above statement.  But the  “archived” files were never handed over and the routers/splunk logs were “analyzed” in secret and cloaked by NDAs as a result of an incredibly lopsided agreement between the Arizona Senate and the Maricopa County Board of Supervisors, and not by the contracted auditors.

The bottom line is this:  there isn’t a court in the United States that has had the guts to hear a case on elections and the vulnerabilities of these machines and make a ruling based on evidence.  This has been exemplified at the US Supreme Court in Texas v. Pennsylvania, et al,  federal courts in GA, and state/district courts also in Fulton Co, Ga, Antrim Co, MI, Delaware Co, PA, Wisconsin, and Maricopa Co, AZ, to name a few.

The post Lake v Hobbs Case in Arizona *DISMISSED*. We’re Sure You Can Guess Why… appeared first on The Gateway Pundit.