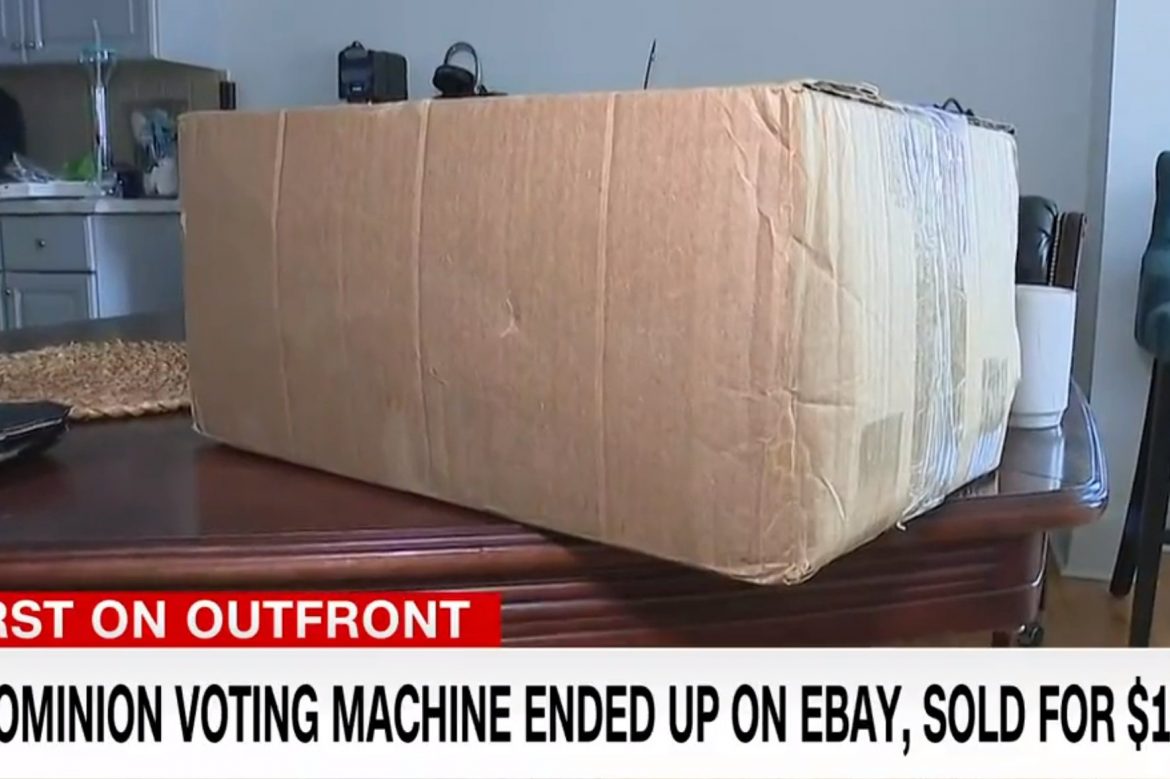 Dominion Voting Machine Bought for $7.99 at Goodwill and Sold on eBay For $1,200 A Dominion voting machine was purchased for $7.99 on Goodwill’s website and sold on eBay for $1,200 last month.

Authorities are now investigating how the machine ended up for sale in the first place.

Though the machine was only listed as “AVALUE TECHNOLOGY Touch Panel SID-15V-Z37-B1R,” Hutchinson knew that it was a voting machine.

“Own a piece of history!” Hutchison’s eBay listing read, according to a report from CNN. “This voting machine was one of thousands used in the 2020 United States presidential election and included in one of the many lawsuits against Dominion that were thrown out.”

Hutchinson started the bidding at $250, but included an option to skip the auction and purchase it for $1,200.

It was purchased for the “Buy It Now” price by Harri Hursti, a Connecticut cybersecurity expert, who was in HBO’s documentary “Kill Chain: The Cyber War on America’s Elections.”

NEW: Police investigating after a Michigan voting machine was sold on eBay for $1,200.

Hursti collects voting machines as he uses them at the Las Vegas hacker conference Defcon, where people are given the chance to mess around with old voting machines.

This machine was different than what Hursti can normally find to purchase, however, as they are usually old and outdated.

Hursti contacted the Michigan secretary of state’s office before the voting machine was even delivered to his home to report what he had bought. He was told not to open the box until it could be investigated.

I contacted MI authorities even before the machine arrived – and before I even knew for certain if the machine had been used in Michigan. I still do not know that as a fact, because the machine is still in an unoeend box.

Hursti soon received an email from the Michigan Secretary of State that said the machine was stolen.

“Thank you again for bringing this to our attention,” the email read, according to the CNN report. “We have determined this device originated in one of our jurisdictions. The jurisdiction has now reported the device to law enforcement as stolen.”

The device was from Colfax Township in Wexford County.

“No election data was on it and you can’t get into the machine without the program cards and those were all accounted for,” Wexford County Clerk Alaina Nyman told Cadillac News,

Colfax Township Clerk Becky Stoddard told the outlet that the machine is a VAT, or Voter Assist Terminal, which is used to mark ballots by handicapped voters.

“It is a tablet for handicapped voters. No election data is on it. It was never used by the public and I’m the only person who voted on it in six or seven years,” Stoddard said. “The MSP is investigating and I’m not sure what happened.”

In a tweet about the mystery machine, Michigan Secretary of State Jocelyn Benson wrote, “ALERT: We are working with law enforcement to investigate allegations of an illegal attempt to sell a voter assist terminal acquired in Wexford County, MI. These terminals do not tabulate ballots, they are for voters who need help marking their ballot privately at polling places.”

Our elections are and remain safe and secure. We take seriously all violations of election law and will be working with authorities to ensure there are consequences for those who break the law. More here.https://t.co/cixBoMQsJB

“Our elections are and remain safe and secure. We take seriously all violations of election law and will be working with authorities to ensure there are consequences for those who break the law,” Benson added.

The post Dominion Voting Machine Bought for $7.99 at Goodwill and Sold on eBay For $1,200 appeared first on The Gateway Pundit.