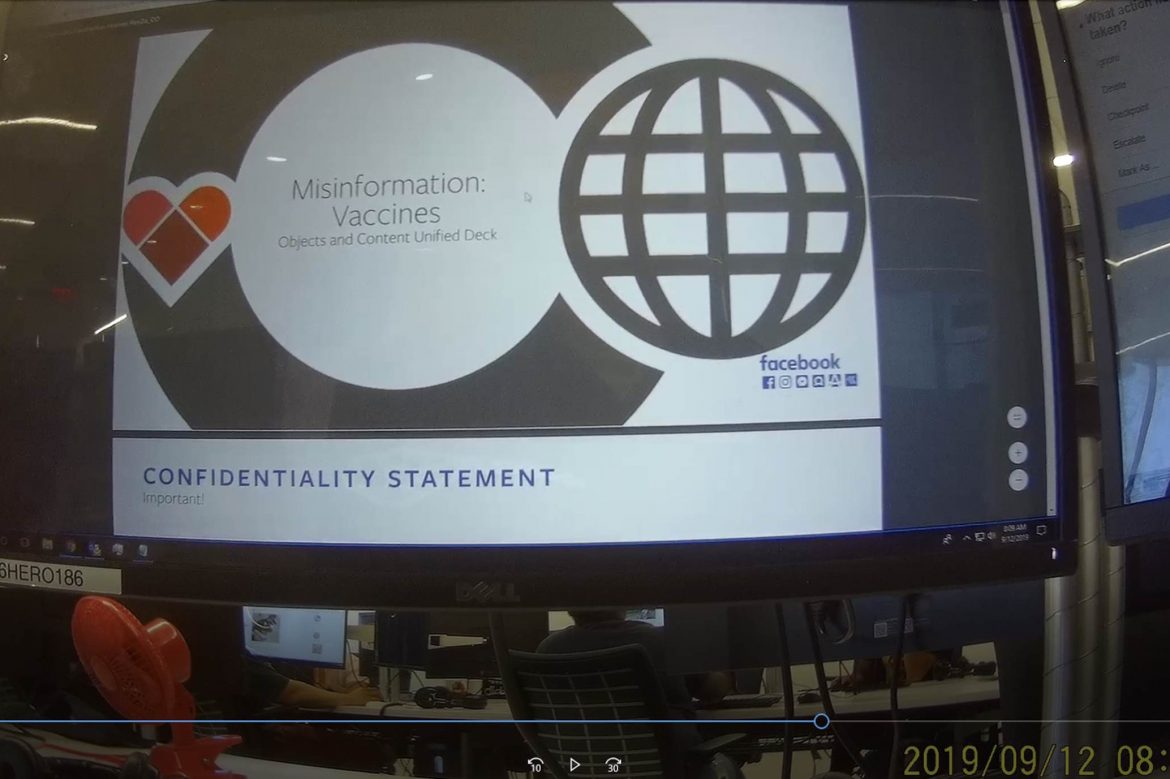 As we wait the 21 days for Dr. Fauci to release all of his email correspondence with Big Tech, Facebook Whistleblower Ryan Hartwig decided to release never-before-seen internal policies filmed in 2019 that show how Facebook treated vaccine misinformation prior to COVID-19.

Knowing how Facebook already treated vaccine misinformation shows that it was a logical step for them to clamp down on COVID-19 health information.

With that being said, should we now expand the initial request and ask Dr. Fauci for emails going back to 2018 and 2019? Did the CDC or Dr. Fauci play a role in shaping Facebook’s pre-covid medical misinformation policies as well?

Mr. Hartwig has revealed 13 images that detail exactly what is allowed to be said regarding vaccines, and what is banned. Their policy is very broad and covers bans on fundraising related to vaccine misinformation, inherently violating hashtags.  Facebook’s policy also prevents claims about vaccines causing chronic illnesses, learning disorders, autism, pneumonia, and other health-related issues.

Not only that, but Facebook gave specific examples of violating claims. For example, the phrase “Natural immunity is safer vaccine-required immunity” is violating. Additionally the phrase “It is unsafe to follow the medically recommended vaccine schedule for children and better to ‘space out’ vaccines over additional years” is violating. One example of an inherently violating hashtag was #vaccinescauseautism. Regardless of the content of the post or of the user, any use of this hashtag would cause the entire post to be violating.

Several examples of violating characteristics are:

Facebook even went so far as to include specific examples of memes that would violate their vaccine misinformation policy.

“If your immunizations work, then why are you not immune? Oh my gosh Karen, you can’t go around asking Pro Vaxxers why their shots don’t work”

Facebook explained that this meme is violating because it contained the following violating claim: “Vaccines are not effective in preventing the disease against which they purport to protect”.

Another shocking violating claim per Facebook’s rules is the following: “Vaccines infect children with the disease against which they are designed to vaccinate”.

It’s very clear now that Facebook has a close relationship with the CDC, and these policies indicate that relationship was very strong, even long before COVID-19. What we have learned from these new documents is that Facebook literally banned groups dedicated to Eastern medicine, and one can only imagine how banning those groups would advantage Big Pharma.

The timestamps on many of these images are from September 12th, 2019, which is during the time period when Ryan Hartwig filmed with a hidden camera while working as a content moderator for Facebook subcontractor Cognizant in Phoenix, Arizona. Hartwig went public in June 2020 with Project Veritas, revealing Facebook’s bias against conservatives and how they allowed attacks against straight white males, among many other things.

Mr. Hartwig is an officer with the Social Media Freedom Foundation, whose lawsuit against the government may fix section 230 once and for all. You can learn more about their cause at https://socialmediafreedom.org/about/ .

Hartwig is the co-author of Behind the Mask of Facebook: A Whistleblower’s Shocking Story of Big Tech Bias and Censorship with co-author Kent Heckenlively, who also authored The Case Against Vaccine Mandates

Below are explosives photos about pre-Covid Facebook policies regarding vaccines: Violating Examples: “Vaccines cause autism” / “Vaccines infect children with the disease against which they are designed to vaccinate.” Hashtag page will only show “Top Only” media Claims that the anti-polio campaign is a CIA/Zionist/Indian conspiracy to infect children with compromised polio vaccine.

Claims that the anti-polio campaign is a CIA/Zionist/Indian conspiracy, action: delete.

Kari Lake, the Republican running for governor in Arizona, recently turned the tables on a...