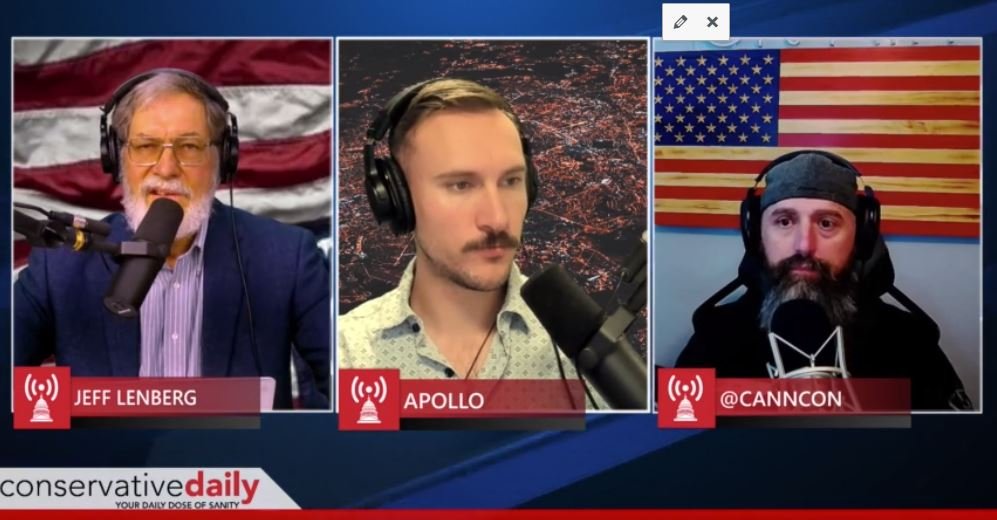 Friday on the Conservative Daily podcast, Jeff Lenberg, an expert vulnerability tester, came on to discuss the hit piece articles that have been published by some of the mockingbird media outlets such as the Washington Post, the AP, and CNN.  The Washington Post, for example, on Tuesday, ran a piece titled “Election deniers repeatedly visited Ga. county office at center of criminal probe, video shows“.

In this article, they frame “surveillance footage” from Coffee County as if Jeff Lenberg and Cyber Ninjas’ Doug Logan are breaking into this building on a weekend or holiday when no one is “home.”

In reality, they were invited in by the Coffee County Elections Supervisor.  You cannot breach an intentionally opened door.

The above video may take a moment to load.  You can subscribe to the Conservative Daily Podcast here and my (CannCon) podcast here as well as on The Gateway Pundit.

In Pearson v. Kemp, it was stated “defendants’ counsel argued that the secretary of state has no lawful authority over county election officials… Plaintiff could amend their complaint to add the election officials in Cobb…” If the Secretary of State does not have lawful authority over election officials, and Plaintiff’s counsel agreed, then it should be within the scope of the County Elections Supervisor to ensure their machines are functioning properly.  In Coffee County, they were not.

In the fall of 2020, prior to the election, Elections Supervisor Misty Hampton, demonstrated on a YouTube video that she could manipulate ballots any way she would like through adjudication, as long as you had the credentials.  You could change a vote in the race that was originally the reason for adjudication , or change a vote on a race that didn’t require adjudication on that same ballot.

Jeff Lenberg also revealed that you can use essentially any type of paper, or even a Xerox copy of a ballot, to run through the machines and they would accept it.  By comparison, a vending machine will reject most counterfeit monies.  This would imply that a vending machine is safer than our election machines.

On election night, Hampton had problems with the machines consistently running batches of ballots without the machine “choking” on a batch.  She became frustrated when the suggested “cleanings” did not solve the problem.  Lenberg noted that she said this occurred more frequently on Trump ballots.  He later explains the significance of this.  One of the election board members called Dominion and said they would give them a half hour to get this machine working or they would call in the news media.  The Dominion staff on-site came back inside and asked them to try it one more time.  Lenberg notes that, according to Hampton, the Dominion staff were not allowed to touch the equipment.  When Hampton tried again and the machine worked “perfectly” from then on, one has to wonder how the machine mysteriously began functioning properly when the Dominion techs returned from their phone call.

The machines in Georgia are not allowed to be networked, however, Lenberg later discovered that, according to the machine’s model number, the motherboard has Bluetooth and wi-fi capabilities built into it.  Additionally, it has the ability to “wake up” periodically and “look for a Bluetooth signal.”  This is evidenced by the Dominion staff being able to somehow reconfigure that machine so it worked properly without ever touching it.

At this point, I asked Lenberg if there was any investigation into how Dominion staffers were able to “fix” the machine without ever touching it.  Of course, there are crickets from anyone who actually has the authority to conduct a criminal investigation and bring about criminal charges.  Instead, they want to ensure no one investigates by investigating anyone who does.

Lenberg then talks about the forensic imaging, which he was not a part of.  He said that the county election board wanted to have this looked and approved of an outside firm to image the machines safely and by professional standards, including retention of an original copy of the imaging.

Once that was complete, they began testing on the equipment.  Lenberg and Logan were both involved in this, however, neither actually touched the machines.  That was left up to Misty Hampton, the official in charge of that county office.  Lenberg and Logan did help fill out ballots to be used in the testing, but equipment handling was left to the local officials.

At the end of the testing, both Logan and Lenberg wrote up reports on what they found, which were seemingly ignored by officials outside of of Coffee Co.

On the ICP machines, they were “reversing ballots” at a fairly high rate (about 15%) and the reversal was 4 to 1 Trump to Biden ballots.

On the high speed scanners, it was a little more shocking:  Lenberg explains that the user interface allows you to change many different scanning parameters like gamma, contrast, sensitivity etc.  Lenberg explained: “Well, that’s nuts on its surface.  If you have a certified piece of equipment that is counting votes, you don’t want to let an administrator go in and adjust how its going to scan votes.  You would never do that!”  Yet, one could, even after certification.

Before they began playing with the parameters, Lenberg claims they could run ballots through perfectly with no issues.  Thousands of ballots.  But when they got to the tenth parameter, that all changed.  This parameter allowed the user to “ignore red, blue, green or none”.  It was defaulted to “ignore red”.  There was no red on any of the ballots they were running.   However, when they set that parameter to “none”, the machine would not run Trump ballots properly.  They couldn’t run 20 Trump ballots before rejecting a ballot.  It would run Biden ballots through no problem, though.

I asked Lenberg at that point if they checked the log files to see what adjustments were done while Dominion was on the phone and “fixed” the machine during the election, but unfortunately, he hadn’t seen those files.

This is the story the mockingbird media won’t tell you.  This was a major flaw that was apparent on election day and duplicated during the testing.  This should be the investigation.  But instead individuals like Jeff Lenberg, who has a well-distinguished career and has held US government clearances, are being investigated and persecuted for pointing out these flaws.  He’s being defamed in the mockingbird media while our government officials who likely benefitted from these processes refuse to make our elections transparent to the taxpayers that fund it.

Show us the election.  Show us the ballots, Georgia.  State law mandates Georgia maintain the 2020 ballots for another two months.  And state and federal law mandate the primary ballots still be retained.  Show us.

But they won’t.  All efforts to see the physical ballots will get stonewalled in the courts after Georgia officials spend hundreds of thousands to fight against transparency.  They’ll send in a team of 22 high powered lawyers and spend probably over $100,000 to depose one cyber forensics expert in a civil case and hope that the Fulton Co DA gets something substantive enough to use in her grand jury.

They’re hoping to kick the can down the road just long enough to make this disappear.  Meanwhile, the mockingbird media’s fascination with the surveillance footage is leading their sheeple down another rabbit hole to obfuscate the real fraud.  And they sop it up.  It’s worth noting that they won’t mention the word “breach” without putting “alleged”, “allegedly” or “allegations of” in front of it.  It’s almost as if they “allegedly” don’t want to get their “alleged” asses “allegedly” sued off for “alleging” allegations.

I leave the mockingbird media and Fani Willis, the rogue DA in Fulton County, with these questions that I doubt they can answer:

** What crimes were broken?  Specifically.

** Why aren’t you investigating the apparent remote access by Dominion in the middle of an election?

** Why aren’t you investigating what Lenberg and Logan found while observing the county officials’ testing?