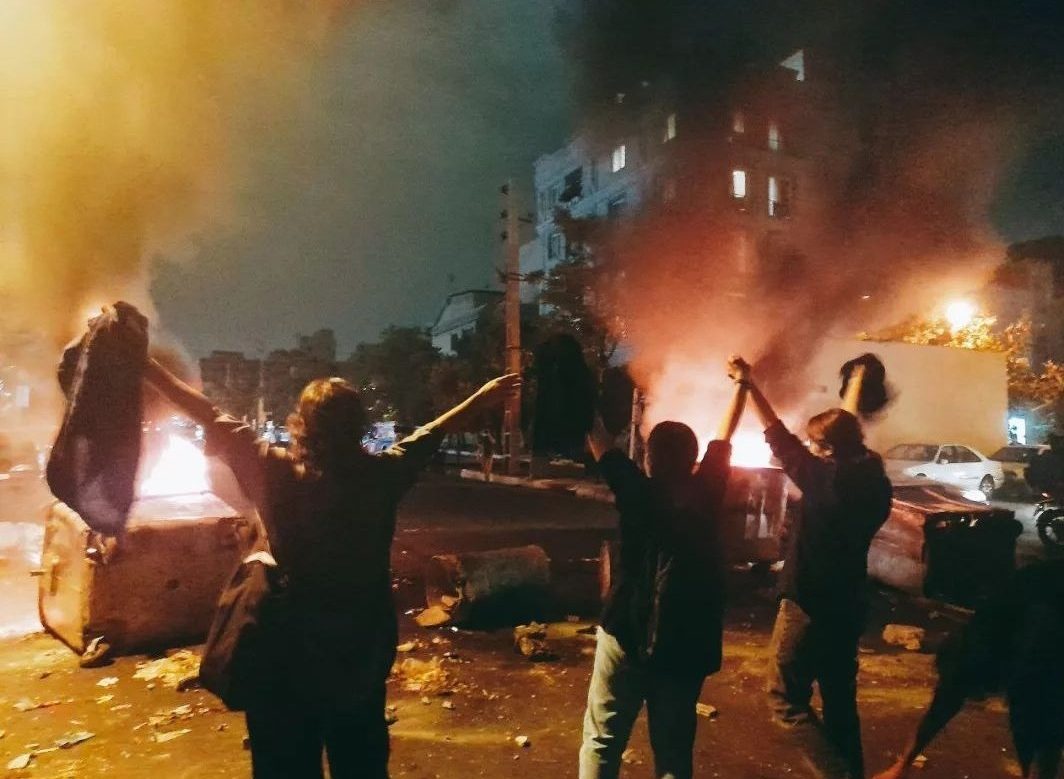 “Tehran’s Streets in the Hands of the People” – Crickets from Jihad Squad!

Persians are rising up against the brutal regime

The protests in Iran are on the verge of toppling the regime. The only thing that can stop the revolution now is another bloodbath like Nov. 2019, when 1500 protestors were killed and thousands more arrested, many of whom were tortured and executed. Now, the protestors are striking back, however.

Thousands of Iranians marched on the streets to protest the death of Mahsa Amini on Sept. 16, after being arrested by the Sharia Police. The protests have now reached 80 cities, according to the Jerusalem Post:

“At least three members of the Iranian Basij paramilitary force were killed in protests sweeping Iran in light of the death of Mahsa Amini on Thursday, with Iranian state media reporting that 17 people have been killed since the protests began.

Basij forces were killed in Tabriz, Mashhad and Qazvin overnight, according to Iranian reports. An Iranian army officer was also killed in Qochan during the protests, according to the Mehr News Agency.

Two civilians were killed and about 25 civilians and police officers were injured during the protests in Kermanshah as well, according to Mehr, which blamed the deaths on “anti-revolutionary forces.”

According to Iran Human Rights, the death toll is 31.

Armored police on motorcycles opened fire on civilians. Protestors are said to be responding with Molotov cocktails.

In several cities, police vehicles and police stations were set on fire.

Power to the people

A video showed an alleged commander of the Basij militia captured and bleeding.

Commander of one of the Basij bases
Oops

Protestors called for Army and police to join them. A video purported to show a regime security officer joining the protesters and calling to the son of the deposed Shah, who lives in Virginia: “Reza Shah, bless your soul.”

A regime security officer seems to have joined the protesters!

Videos seemed to show security officers fighting among themselves.

It was unclear who has the upper hand at the moment.

“Tehran’s streets in the hands of the people”, wrote Iran observer  Alireza Nader.

See ho many people are being killed for protesting the brutal death of #MahsaAmini, who was murdered by Hijab police for wearing improper hijab.
A headscarf is worth more than our life in Iran. I call on women in the world to show their solidarity.
pic.twitter.com/JmhUMt2HuA

CNN’s @amanpour says Iranian President Ebrahim Raisi has declined to show up at a preplanned interview with her in New York after she refused to wear a headscarf upon Raisi’s request.
“I couldn’t agree to this unprecedented and unexpected condition,” she tweeted. pic.twitter.com/92GiWbWBcE

“Raisi should never have been allowed to enter our country”, Senator Ted Cruz wrote in Newsweek. “The president is prohibited by Congress from granting entry visas for the UN to leaders who have committed terrorist activities, including threatening assassination, and who pose a risk to our national security. In January, Raisi threatened to assassinate former president Donald Trump, former secretary of state Mike Pompeo, and other officials. Last month, the Department of Justice unsealed charges against a member of Iran’s terrorist Islamic Revolutionary Guard Corps who plotted to assassinate former national security advisor John Bolton.”

“Raisi is a monster whose entry into the United States was completely unwarranted”, Cruz wrote. “As the Islamic Republic of Iran actively plots to kill American citizens on our own soil, it is obvious that its president should never have been allowed to freely walk the streets of New York.”

The internet is down in most of Iran. Hackers’ group Anonymous claims to have hacked the websites of the Iranian President Raisi, Supreme Leader Ali Khamenei, and state broadcaster IRIB, among others.

You know who still has not said a single world about the #IranProtests or the #Iran regime’s murder of #MahsaAmini? That’s right, The Squad!

Why is that? I thought @AOC, @IlhanMN and @RashidaTlaib were all about supporting women’s rights?

The post “Tehran’s Streets in the Hands of the People” – Crickets from Jihad Squad! appeared first on The Gateway Pundit.